Visit to a Primary School

Hey! This is a free bird talking!
I am finally relieved from my duties of a corporate job. On my last day I stayed back at office till 11:15 PM and almost my entire team was staying back along with me as we all waited for my final hour to pass.
Anyways, Let me tell you about the next morning  just after my final day - I traveled in local train to reach outskirts of Bangalore in a village called Soldevanhalli. After half a kilometer walk I reached my destination – a school run by Muralidharan Sir under name of Gopal Trust (Strike 1 : both refers to Krishna). A little background on the school: The School is meant for underprivileged children whose parents may or may not pay their fees. A child is not asked to leave if parents aren’t paying. Most of the children have never got a formal education and those who have they have studied in Kannada Medium. Muralidharan Sir is not married and he has devoted his life in serving the children. He has an 85 years old mother. He has adapted almost 10 children whose parents didn’t accept them or are orphan. The school is run by donoations, Sir’s government job and the fees of few children. Children are served mid-day meals from Akshay Patra Scheme of ISCKON Foundation. Almost all the furniture is made out of donated furniture.
Strike 2 : the school was opened two years back with just 36 children. Currently the school has almost 700 students in classes 0-10. The school has a recreational room, computer lab, school vans and a nice playground.
When I reached, it was lunch time. The children were at the top of their voice having fun. There was a dog called Pinky who was intelligent enough to understand all instructions – Go, Come, Sit, Eat etc. This was all fun. But then the real deal started –
Strike 3: All these Children were neat and clean and were talking in English. One of a third grader was able to read 10th Grade Physics book and was flawlessly reading words like Substitution, Efficient, Effectiveness etc. Consider this in light of fact above that most of the children haven’t received a formal education and this child was just six months into it. As for mathematics, Children knew Mental Maths and Vedic Mathematics. A five year old girl was able to answer my questions like “How many sisters you have?” in proper English sentences 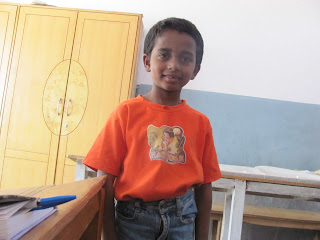 How was this possible?
Answer: When you have devoted yourself into something, this is not difficult. There is no magic as I learned. It is all hard work and devotion. There is a very simple way of teaching fundamentals of every language and that’s what he was doing. One of the best ways is to teach children how to comprehend. Teaching them how to read isn’t a difficult part too. His method states break the word at every vowel and then read it. The sound of the word is decided by the vowel and consonant combination. I can keep talking about it but the bottom line is “Where this is a will, there is a way!” There is a sense of urgency to get these children educated. His calmness doesn’t reveal that urgency but his cut-throat methods do. 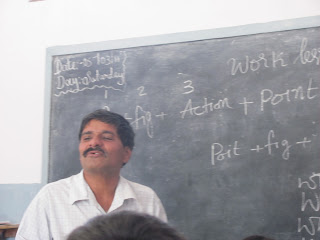 This was my first visit and that too a short one but I will have more to tell about the school when I visit next!
Till then take care!
at 2:02 PM 2 comments: